← more from
FPE Records
Get fresh music recommendations delivered to your inbox every Friday. 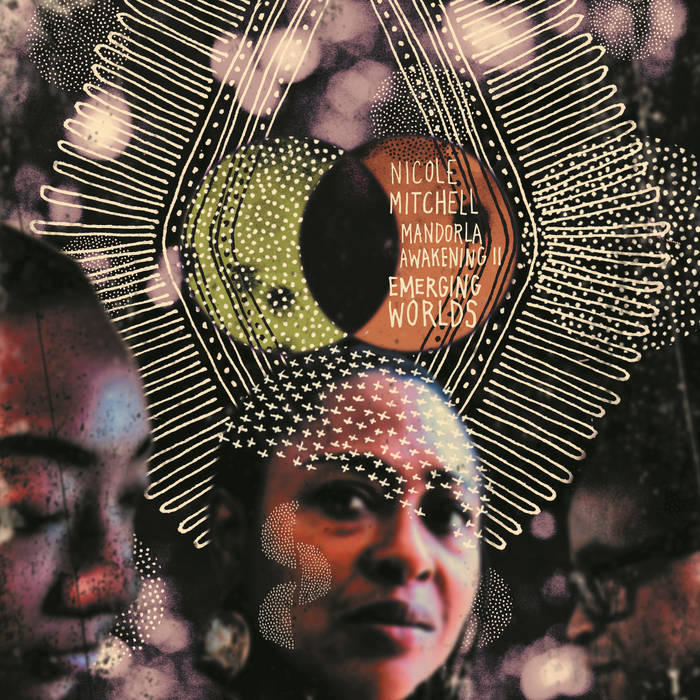 World of Echo This is the album that started the policy that I had to keep my office door closed at work because the squares got all flustered by the dissonance or whatevs.

symphronik Terrific continuation and expansion of the work of AACM and Sun Ra, this music stands on its own. Excellent!

Paolo Cavallo If this admirable work of an admirable artist is tied to a Sci-Fi novella by Nicole Mitchell herself, where can I read it? I would absolutely love to do that! Favorite track: Listening Embrace.

"One of the most exciting jazz soloists and composers in the world" --Peter Margasak, Chicago Reader

Blurring the edges between philosophy and mysticism, modern art and radical political critique, the Afrofuturist impulse has been a cultural force since the mid-20th century. That’s when jazz visionary Sun Ra and his Arkestra first touched down on Planet Earth and told humanity that space (outer and inner) is indeed the place. It’s an impulse that in the new millennium has only grown more diverse thanks to a proliferating number of African-American musicians who use Afrofuturism as a platform to launch their own, unique visions. Among these explorers are cosmic jazz saxophonist Kamasi Washington, post-everything beat maker Flying Lotus, R&B cyborg Janelle Monáe and dystopian noise-rappers Death Grips.

The innovative, boundary-smashing work of Nicole Mitchell, whom Chicago Reader music critic Peter Margasak has hailed as the “greatest living flutist in jazz”, has contributed new life to Afrofuturism in the 21st Century. A voracious reader of science fiction since her youth (Afrofuturist author Octavia E. Butler in particular has exerted a heavy influence on her music), the musician, composer and educator has released a string of albums that fold themes centered around technology, spirituality, race and gender into profoundly exploratory jazz that oftentimes reaches far beyond the genre in which it is rooted. Her vast sound can and often does encompass contemporary classical, globally oriented fusion, gospel, spoken word, funk-inspired groove research and even brittle shards of avant-rock.

On Mandorla Awakening II: Emerging Worlds (FPE Records; May 5), her second and latest full-length for the Chicago-based FPE Records, she uses science fiction to pose the question, “What would a world look like that is truly egalitarian, with advanced technology that is in tune with nature?”

Mandorla Awakening II explores what Mitchell describes as the “collision of dualities.” The work chronicles the journey of a couple as they find themselves navigating between two civilizations: the World Union, a crumbling society rampant with injustice and inequality, and Mandorla, a utopia where spirituality, technology and nature coexist harmoniously. The former is masculine, hierarchical and violent while the latter woman-centered, egalitarian and peaceful.

“I’m African-American, and I have a lot of anxiety living in this world today,” Mitchell explains. “Mandorla isn’t an altogether ‘hopeful’ piece, though optimism peaks through at times. I tend to be pretty optimistic, because I believe humanity has the power to co-create its future. Yet it does seem lately that my feelings about living in the U.S. is tainted by the failure and closing of so many schools populated by poor people and people of color, the intense lack of employment in our major cities, and the intensifying of violence on Black men.”

But despite these realities, Mitchell isn’t a dystopian by a longshot. She remains steadfast in her Afrofuturist utopianism, and Mandorla Awakening II can be seen as her attempt to will it into existence for the sake of all of us. As Mitchell points out, “Someone once wrote me something that helps me to keep going. He said, ‘Keep playing music, because while you are playing, your vision of a positive alternative future lives, even if it’s only until the song is over.’”

Mandorla Awakening: Emerging Worlds is a recording of the world premiere performed at the Museum of Contemporary Art in Chicago on May 2, 2015, as part of the Creative Music Summit.

Nicole Mitchell: Mandorla Awakening: Emerging Worlds was commissioned by the Museum of Contemporary Art Chicago. The MCA presentation was in conjunction with the 50th anniversary celebrations of the Association for the Advancement of Creative Musicians (AACM), and
contributes to the legacy and continuing bold and exciting directions that the AACM has charted for decades. Emerging Worlds was presented as a multi-arts project featuring the experimental video of Ulysses Jenkins. The project was supported in part by the Doris Duke Foundation.

Big thanks to the Creator, to our families and friends, and to the Museum of Contemporary Art, the Doris Duke Foundation and University of California, Irvine, for their support towards helping us to manifest this project. Special thanks to the musicians of Black Earth Ensemble, Yolanda Cursach of the MCA, the AACM, Matt Pakulski, and to my husband Calvin Gantt.